For Movie Lovers: The Top 10 Accidental Comedies Of All Time 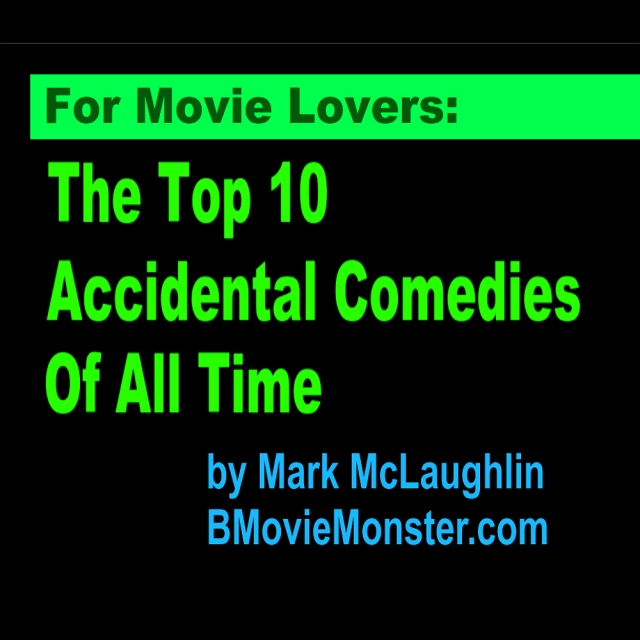 Every now and then, a movie comes along that was clearly meant to be a riveting, thrilling drama – but somewhere along the line, its creators went overboard and the movie inadvertently shifted into a comedic gear. That’s what I call an accidental comedy – a type of movie I dearly love. Below, I’ve listed what I consider to be the top 10 accidental comedies of all time. You can find most of these films on YouTube and/or DVD collections of vintage movies.

I’ve arranged these movies chronologically, since I’d be hard-pressed to arrange them by their quality. With movies like these, how can you tell which one is best … or worst? An early warning: Some of the write-ups below contain spoilers, so if there’s a movie in the list you haven’t seen yet and you want to be surprised, you might want to skip reading that particular paragraph.

MANIAC (1934) – When you think of cheap, sleazy horror movies, you don’t usually think of films from the 1930s. In that regard, watching MANIAC will expand your knowledge of movie history exponentially. Basically, this is a convoluted retelling of Edgar Allan Poe’s “The Black Cat,” featuring a mad doctor who wants to raise the dead. The doctor’s assistant kills him and then begins to impersonate him with zesty aplomb (I told you it was convoluted!). The assistant then shoots up a patient named Buckley with the wrong drug and before you know it, poor addled Buckley is dragging a half-naked corpse around the countryside. Somehow cats get roped into the action and, per the “Black Cat” plotline, a dead body in the wall makes a cameo appearance. The feverish wall-to-wall over-acting makes this an inadvertent comedy classic.

THE GIANT CLAW (1957) – At last there will come a day when the Earth has to face its greatest opponent: a giant space-bird that apparently lives to destroy. The whole world quakes with fear as this fine feathered extraterrestrial ruins lives, vehicles and real estate at a dizzying rate. We are told it is as big as a battleship, and that it came from an antimatter galaxy. It all sounds perfectly horrifying, but alas, cries of terror give way to gales of laughter when we see that the creature looks like a demented, googly-eyed, turkey-vulture piñata. Apparently, that was the best that the producer could afford…. But hey, maybe aliens DO look like demented, googly-eyed, turkey-vulture piñatas. Who can say?

BLACK SUNDAY (1960) – Many people consider BLACK SUNDAY to be a horror classic … and it is! It is an elegant production that tells a brooding tale of death, black magic, and revenge. Actress Barbara Steele is entrancing as the lovely, evil witch, Asa Vajda. I’m sure there are plenty of people who watch this movie without laughing. But, I’ve seen it many times, and the more you watch it, the more you realize that there’s waaay too much talky, repetitive exposition. Authoritative characters explain every little thing down to the last detail, and that evil witch should does like to gloat, monologuing with more gusto than the villain in any James Bond movie. This is one movie where the inadvertent humor grows on you with repeated viewings.

THE GREEN SLIME (1968) – This energetic American/Japanese production has one of the most exuberant theme songs you’ll ever hear, and certainly will never forget! The lyrics include these thought-provoking questions: “Is it something in your head? Will you believe it when you’re dead?” Astronauts are sent into space to destroy a huge asteroid heading toward Earth, and some green ooze from the surface of the asteroid smears on their outfits. After they blow up the asteroid, they return to their space station. The asteroid ooze soon grows into green, one-eyed monsters with tentacles, and while they try their best to be frightening, the aliens are really just goofy little Cthulhu-wannabes. There’s drama galore throughout the movie, but all the rubbery space-goobers are more of a humorous distraction than a threat.

GODZILLA VS. THE SMOG MONSTER (1971) – Most old Godzilla movies have amusing aspects to them, and most of that humor relates to the rubbery suit of the title monster. In this one, the Smog Monster, also known as Hedorah, is even more bizarre and comical than Big G. Like the little space-goobers in THE GREEN SLIME, Hedorah is goofy, rubbery, and more adorable than abhorrent. In the big face-off at the end, Godzilla goes to such great lengths to finish off Hedorah that the battle takes on a distinctly wacky tone. The movie features a few short cartoon sequels with ecological messages, and those also add notes of whimsy to the movie.

INFRA-MAN (1975) – INFRA-MAN was certainly meant to be a fun movie, since the characters, for the most part, are bold and cartoonish. But, it was obviously written as a superhero action movie, as opposed to a comedy. A scientist turns a colleague into a bionic hero named Infra-Man to defend the world against the evil Princess Dragon Mom and her devilish mutant followers – namely, She Demon, Giant Beetle Monster, Octopus Mutant, Emperor of Doom, Driller Beast, Laser Horn Monster, and the twin Iron Fist Robots. The funniest aspect of the movie isn’t the action or the characters – it’s the grandiose dialogue. For example, when Princess Dragon Mom first addresses the Earth, she states: “Greetings to you, Earthlings! I am Princess Dragon Mom. I have taken over this planet. Now I own the Earth and you’ll be my slaves for all eternity!” Wow, nice way to greet her new neighbors. Later, the scientist tries to intimidate the forces of evil by saying, “No matter how potent your weapons are, you’ll be defeated because Infra-Man is invincible against them!” The entire movie is filled with this same high-power, hilarious degree of bravado.

EXORCIST II: THE HERETIC (1977) – THE EXORCIST is considered one of the best horror movies of all time. EXORCIST II: THE HERETIC, on the other hand, is considered one of the worst movies of all time … and rightly so. Linda Blair returns to her role as Regan, now recovered from her exorcism ordeal, and Richard Burton plays Philip Lamont, a troubled priest. Father Lamont has been sent by the church to investigate the original exorcism and Father Merrin’s death, which had resulted from that exorcism. The movie goes in many strange directions, and some are laughably bizarre. For example, locusts figure heavily into the plot. Who would have guessed? We find out the demon Pazuzu is a sort of locust demon, and that for reasons too lengthy to explain, Regan now knows how to perform a dance to drive off locust swarms! Also, there’s a machine called a Synchronizer that can align two people’s brainwaves, and the scene with that device is weird, wild and fairly ridiculous. I would like to add, even though it’s awful, I happen to enjoy many awful movies, and I’ve watched EXORCIST II: THE HERETIC at least a dozen times over the years.

MOMMIE DEAREST (1981) – Faye Dunaway played Joan Crawford in MOMMIE DEAREST, and certainly she sank her teeth into the role. The movie tells how Crawford was an abusive foster mother, as well as a compulsive perfectionist and neat-freak. She wanted to control every aspect of her world, and became overly upset when things didn’t go her way. The character’s behavior is so extreme that most viewers cannot help but laugh at her bombastic emotional excesses. The movie eventually became known as an unintentional comedy after its release. For that reason, the film has ascended to cult-movie status – an acknowledged best-of-the-worst classic.

KING KONG LIVES (1986) – KING KONG LIVES is the sequel to the 1976 remake of the original KING KONG from 1933. In this sequel, we find out that after King Kong fell off the World Trade Center, he was kept alive in a coma at a facility called the Atlanta Institute. How did Kong’s fall from the World Trade Center not shatter his bones to bits? Darned if I know! Kong’s doctor, played by Linda Hamilton, wants to bring the big guy out of his long-term slumber, but he needs a major transfusion before that can happen. Eventually a female giant primate, Lady Kong, is found in the Borneo area and becomes the donor Kong needs. Once the blood situation is squared away, Kong is given a gigantic artificial heart and restored to a mobile lifestyle. Kong then gets mixed up with Lady Kong and sure enough, runs afoul of civilization again, escapes … and is marked for death. It took so much time and effort for us humans to wake him up, only for us to decide he needs to die. Humans sure are fickle! Along the way, Kong fathers an adorable Kong Jr. Aaaawww! KING KONG LIVES tickles me because it makes precious little sense … but still, it ambles and shambles along with carefree confidence.

There you have it – my list of the top ten accidental comedies of all time. I do want to stress, this list isn’t etched in stone. Certainly I’ve seen thousands of movies over the years, but I know I haven’t seen every movie ever made. But rest assured, I’m working on it!

Mark McLaughlin is the author of the novels, HUMAN DOLL, THE HELL NEXT DOOR, and INJECTABLES. His fiction, nonfiction, and poetry have appeared in more than one-thousand magazines, newspapers, websites, and anthologies, including Cemetery Dance, Black Gate, Galaxy, Fangoria, Writer’s Digest, Midnight Premiere, Dark Arts, and two volumes each of The Best of the Rest, The Best of HorrorFind, and The Year’s Best Horror Stories (DAW Books). Mark also enjoys writing horror stories about cats, since he grew among more than 40 cats (and assorted human relatives). Many of his cat horror stories can be found in his Kindle collection, MIDNIGHT PET SHOW And Other Twisted Cat Tales. He is the author of many books of horror, so be sure to visit his Amazon Author's Page at http://www.amazon.com/Mark-McLaughlin/e/B008QCY4TC/
View all posts by bmoviemonster →
This entry was posted in Uncategorized. Bookmark the permalink.